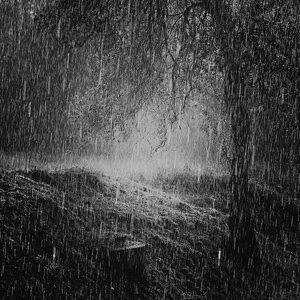 Have you ever seen a rainstorm with the lights off? Well I did yesterday. And it was unbelievable.

Last night, there was a blackout. People had exams the next day. Naturally, there were many shouts and curses. The wind was still. The heat was intense. Naturally, the heat had to break.

I walked outside to hear rain pattering on the roof next to me, but shelterless, in the open, I felt nothing. The rain was falling in a straight line, and I was centimeters from it, on the dry side. I tried to tell people, but it’s amazing how many humans don’t care about cool things like this.

With the lack of artificial light, the luminescence of the waning, gibbous moon was evident, shining so brightly that standing outside, in open space, you could see your shadow. The center of the moon’s light in the sky was red, but farther away, you could see rain clouds in a sky that was neither black nor indigo, but a lightening violet. Again, it’s amazing how many people don’t care enough to just shut up and stare.

The electricity flashed on and off again maybe three times, but I liked it best when the lights were out.

As other people rushed for the safe darkness of their rooms, I remained outside on the veranda, upstairs in my hostel, and I was there when the storm actually started; exposed enough to feel the elements fractionally as they wreaked havoc on tranquility, but protected enough not to be wreaked havoc on. I was smiling like an idiot. These orchestrations of nature get me illogically excited. I promised myself to write about it, hence the words you’re reading now.

I was with a friend called Deborah. Here’s a funny occurrence: She began to ask me, “Have you ever just been scared of being struck by —” Interrupting her was a simultaneous crack of thunder and flash of quasi-daylight-inducing — yep, you guessed it — “lightning,” she finished weakly, and we both burst out laughing. Nature is chock-full of jokes. Nevertheless, I decided to attribute it to her and pronounced her Ewe. (Please ooh, she’s not actually Ewe.)

Watching the storm, I entertained thoughts of science — how water evaporates from the earth’s surface and waterbodies and condenses into clouds; Poseidon—getting angry over the parched seas that comprise his territory, vowing to return that condensed vapour back where it belonged, hence the downpour; and Zeus, god of the sky, showing off his power with his master lightning bolt, just because he can; and maybe a rogue minotaur or sphinx, growling out thunder from a cage up in Olympus. You might think me a maniac, but this mythology obsession I have isn’t half as bad as it used to be.

In truth, the whole storm felt apocalyptic, and despite this and all the fantasies about the Greek gods, the thoughts that were most prominent in my mind were ones about my own God, capital G, the only one who could do all these at once, the Conductor of an almost-natural disaster’s wild, grand symphony. To me, every piece of nature that I am too captivated to stop admiring is a reminder of His obvious existence and power, and I suppose that’s why I get uncontrollably happy.

The lightning made the grass look as green as the sun ever could. The amplified thunder was music to my ears. And the rain? It was a paradox of physics. It fell as drizzle, and it fell as solid sheets. It fell like a white waterfall of liquid and it blew like gray vapour, diagonally, spraying me and getting me cold. Did I care that through the window, it was wetting my bedroom floor? Ha! Ask yourself that question. Did I care for that singular line of someone’s unfortunate underwear getting drenched? Maybe I should have…but I didn’t.

Later, when I went back inside, I realized I’d been holding a bottle of water the whole time. I also realized that its temperature was as if it had been in the fridge for an hour. But who needs electricity when you have hydro, lightning-electric power?

And I will end by sharing a corny, ridiculous joke I came up with a long while ago:

Why do people use the expression “the air was charged with electricity”?
—Because the sky has a lightning cable.

(Sorry if you people who know nothing about Apple devices don’t get it.) =)

-With maximum love to everyone who bothered to read the whole thing,
Ivana.

7 thoughts on “Have You Ever Seen A Storm With The Lights Off?”