This is actually a play. Playwright: Oscar Wilde. 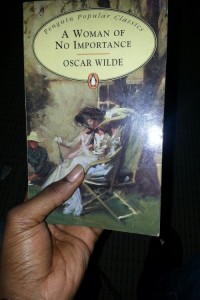 From reading A Woman of No Importance, I concluded basically the same thing I concluded after reading Fitzgerald’s “The Great Gatsby”, which is that, if I were to ever exist in this era (ignoring the fact that I’d be a black slave, of course), I’d either hate everybody to an unhealthily high degree, or I’d be so amused they’d have to fabricate a new delirium to diagnose me with.

What stuns me is how Wilde’s characters each have such striking personalities. Lady Caroline, yeah that girl is messed up. All those marriages have made her start treating her helpless husband, Sir John, like a misbehaving dog. Lady Stutfield, that follow-the-leader lady with a very, very (that’s a joke you’ll get if you’ve read the play) limited arsenal of adverbs. Lady Hustanton, the host, is almost sensible. ALMOST. Hester, the only American in the play, is by far the most intelligent woman. How anti-patriotic of Wilde.

As for the guys in the play, absolutely none of them are relevant to me except Gerald, who’s headstrong and slightly foolish, and Lord Illingworth. Lord Illingworth just kept on cracking me up because the guy’s an immoral idiot, but he’s a hilarious immoral idiot, even worse than Algernon from “The Importance of Being Earnest.” Most of my favourite quotes come from him. And Wilde, this King of Irony, makes him stab himself in the back, for all his foolish talk is worth.

I don’t know if anybody still reads these classic books for the sake of reading, and not just school, but I am ENCOURAGING PEOPLE to read this play. That’s why this post is spoiler-free and not analytical. As a matter of fact, I don’t believe Oscar Wilde deserves to be studied. Studying people’s writings demeans them, in my opinion, and turns some of the greatest writers into “have to but don’t wanna” authors instead of “don’t have to, but can’t stay away from you” authors – in terms of readers’ reaction.

Is it legitimate that Wilde’s surprises always…well, astound me? At some point of revelation in the play, I was literally going, “Oh my gosh! So wait, that was – oh my gosh!’ out loud, which really isn’t healthy when you’d like people to think you’re sane.

The one advantage of playing with fire, Lady Caroline, is that one never even gets singed. It is the people who don’t know how to play with it who get burned up.

Well, can I get some matches, please?

It is perfectly monstrous the way people go about, now-a-days, saying things against one behind one’s back that are absolutely and entirely true.

How scandalous! TRUE rumours?! What is the world coming to?!

Vulgar habit that is people have now-a-days, of asking one, after one has given them an idea, whether one is serious or not.

Can I give a shout-out to all my Ghanaians for this one?

How can a woman be expected to be happy with a man who insists on treating her as if she were a perfectly rational being?

Oh, duty is what one expects from others, it is not what one does one’s self.

Discontent is the first step in the progress of a man or a nation.

There’s a shred of sensibility in this, you know.

My dear Gerald, examinations are of no value whatsoever. If a man is a gentleman, he knows quite enough, and if he is not a gentleman, whatever he knows is bad for him.

Spoken like a well-bred idiot. I, however, completely agree with the first part.

To win back my youth, Gerald, there is nothing I wouldn’t do – except take exercise, get up early, or be a useful member of the community.

The mind state of every lazy adult, right there!

2 thoughts on “My Thoughts: A Woman of No Importance”