There are storybooks, and then there are novels. Books take you through them and tell you the story they have planned for you. You finish them, they either satisfy or dissatisfy you, either way, probably achieving their purpose, and you, as a reader, may walk away. But a novel – ah! A novel is a collection of words that pull a reader so deep into the world between its pages/words that lifting your eyes is like being awakened from a disorienting dream that was vivid in full-colour and HD. A novel is such that a reader knows, as he is submerged in it, that what he is witnessing is not just a story; it is an art form as good as – or better than – any painting can over. At the end of it, you’re either left speechless and contemplating the meaning of life, or convinced that in there is reality and what you’re living in is a mirage. The Shadow of the Wind, by Carlos Ruiz Zafon, is one such book. 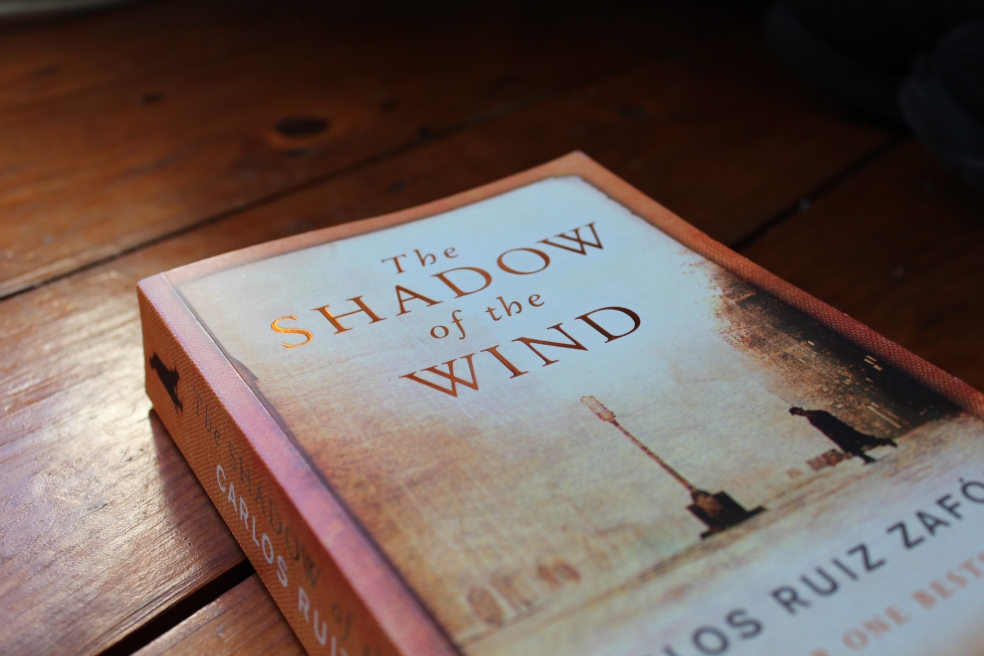 It’s a book for true lovers of books, with characters who are intimate book lovers. My new dream: to see or create a version of the Cemetery of Forgotten Books before I die.

The language used in this book is beautiful, and right now, the best I can think of to compare it to is the language used in Marcus Zusak’s The Book Thief, or Khaled Hosseini’s And The Mountains Echoed. Just look at this: “A labyrinth of passageways and crammed bookshelves rose from base to pinnacle like a beehive, woven with tunnels, steps, platforms, and bridges that presaged an immense library of seemingly impossible geometry.”

As for its tone and content – well, I couldn’t understand how a book could be so deep and profound and yet so comical at the same time. It has foolish word-play jokes like “armed with a missal” and “advising him not to leave his employment as a pianist, as it was obvious that he was not going to hit the right note in literature.” Then you see things like, “People talk too much. Humans aren’t descended from monkeys. They come from parrots.”

My favourite character is Fermin Romero de Torres. I think that is predictable if you know me.

Hey, if you want to read a book that can mess with your head until you are even tired, this is actually the book for you – no lie. It’s as good as any series with a sensible write, man. Honestly, even when you think the book is over, it will assure you that it has more shocks in store. Plot twists be what!

“After a while, it occurred to me that between the covers of each of these books lay a boundless universe waiting to be discovered, while beyond those walls, in the outside world, people allowed life to pass by in afternoons of football and radio soaps, content to do little more than gaze at their navels.”

“There’s no such thing as a dead language, only dormant minds.”

“Clara brought me no more than suffering. Perhaps for that very reason, I adored her all the more, because of the eternal human stupidity of pursuing those who hurt us the most.”

“Nobody knows much about women, not even Freud, not even women themselves. But it’s like electricity: you don’t have to know how it works to get a shock.”

“In this world, the only opinion that holds court is prejudice.”

“Disarmed, I realised how easily you can lose all animosity towards someone you’ve deemed your enemy as soon as that person stops behaving as such.”

“Not evil…Moronic, which isn’t quite the same thing. Evil presupposes a moral decision, intention and some forethought. A moron or a lout, however, doesn’t stop to think or reason. He acts on instinct, like an animal, convinced that he’s doing good, that he’s always doing right, and sanctimoniously proud to go around fucking up, if you’ll excuse the French, anyone he perceives to be different from himself, be it because of skin colour, creed, language, nationality or…his leisure pursuits. What the world really needs are more thoroughly evil people and fewer borderline pigheads.”

“Things have always been like this, here and everywhere else. The trouble is, there are some low moments, and when those strike close to home, everything looks blacker.”

“There are worse prisons than words.”

“…a stranger sees us the way we are, not as they wish us to be.”

“Books are mirrors: you only see in them what you already have inside you.”

“Making money isn’t hard in itself…What’s hard is to earn it doing something worth devoting your life to.”

“A story is a letter the author writes to himself to tell himself things that he would be unable to discover otherwise.”

“As long as we are remembered, we remain alive.”

5 thoughts on “My Thoughts: The Shadow of the Wind”