“And as we let our own light shine, we unconsciously give other people permission to do the same.” – Marianne Wilson.

I first heard this quote in Akeelah and the Bee, and even if I appreciated it then, I believe in it more whole-heartedly now. When was the last time I heard something so…true?

We influence people in ways we never thought we could. And most of the effect we have are not even the ones we’re aware of.

Ladies and gentlemen, it’s important – it’s so important – that we have the courage to be ourselves, to tell the truth, to do us every day, every second of our lives. Because by so doing, you could save someone’s life. It could be something, anything peculiar about you that someone sees and gets inspired, whether it’s the way you walk, the way you dress, the way you smile amiably to the people you barely talk to…Everything you do counts, even when it feels so insignificant and commonplace to you that you don’t even notice it. Like reading, unconscious dancing or smiling.

You see, we live in an era that has so much more free space to be an individual in any way you want, as my mentor, Victor Butler once told me. But the other truth of the matter is that in our various communities, and even in our own heads, there’s still some sort of status quo, even among the chaos. As such, it’s natural to feel afraid, or perhaps just not as confident as you would like to feel when you think about doing something “different.” But that, my dear, is where the influence comes in.

By you being yourself in all your fullness, you show people that they don’t have to fear doing something, because you’re living proof that it is possible. The sad thing is that you might not always know how relevant you are, because a lot of the time, the people you’re influencing don’t tell you. I myself am a culprit of not always telling awesome people who inspire me that they’re awesome. It could be due to a number of factors (of course, not always legit), like feeling awkward about approaching the person randomly and telling them, especially if you’re not really that close.

Even if you hate yourself, something about you is what someone else thinks is the coolest thing in the world. Do you, baby, do you.

I appreciate the minorities. Especially the musicians – the ones who aren’t mainstream. I love the fact that they continue to do what they do in their own style, even when it would be the easiest thing in the world to go mainstream, gain fame and a wider audience, and make tonnes of money. Case studies: R Kelly, Miley Cyrus, Mali Music etc.

I, for instance, am blown away by the image and personality of Janelle Monae. Her music, first of all, is so weird and unique that it’s difficult to even put an accurate label on her genre of music. She has astounding quirks, like wearing only tuxedos to perform live, never wearing any clothes that are not within the black, white and red colour scheme, and the creation of alter ego, Cindy Mayweather, who is, apparently, a legit android. Janelle is crazy cool. I may be a bit obsessed with her.

But she’s constantly preaching being different, and the fact that she doesn’t change her style, personality or music, even though it’s obvious she’s not as popular as any regular pop musician is what assures me that she’s absolutely determined to keep “doing her”.

“Even if it makes others uncomfortable, I will love who I am.” – Janelle Monae. 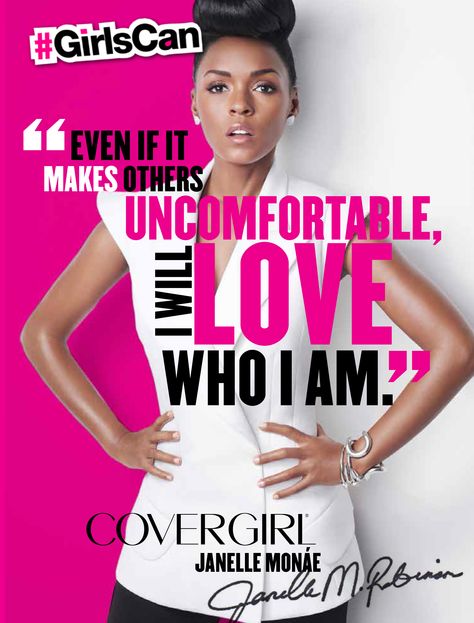 Mais, n’oubliez pas, you may be seeing people who are uncomfortable with you, but what you may not be seeing is the people who are drawing courage from your individualism. So, don’t be scared to be different.

“I don’t wear the clothes you wear.

It’s kind of sad and it’s a shame

Everyone wants to be the same.

If you are listening here and now,

I’m sure I can show you how

It’s okay to be afraid

I’m not asking anyone to deliberately go out and be different by force. I’m just saying don’t compromise yourself, because you don’t need to look for difference; everyone already is, in some way, if they allow themselves to realise it.

Also, in being yourself, I’ll advise that you say what you want to say. If you live in a small microcosm most of the time like I do, you may find that people tend to think the same way. If what you say is not in line with their view, you’ll tend to get a lot of negative feedback. But the world is big, and it holds far more people than your mind has yet been able to comprehend. Find some avenue, but don’t stop saying what you believe in, unless your mind changes, then start saying that too.

“Be who you are and say what you feel, because those who mind don’t matter, and those who matter don’t mind.” – Dr Seuss

Because the world is full of such a wide variety of people that no matter how controversial your views are, there is someone in the world who agrees with you.

The Importance of Showing Off

Months ago, I wrote something called The Typecasts That We Create. I also had it published in my school’s magazine in a futile attempt to create awareness of a problem that either nobody could see or everybody was too afraid to talk about…I don’t think anybody read it. So there’s another wound for my morale.

Nevertheless, I felt the need to follow-up on it, and that’s why I’m writing on the importance of showing off.

We typecast because we believe in the abilities of people who we have witnessed use them, just because they’ve done it before. And really, it’s legit to think that if they did it before, they can do it again. The danger is that, through this typecasting, their displays might push everyone else into the shadows.

But you can’t be in the shadows if you’re constantly showing off. I’m not talking about arrogance or boasting. I’m talking about clearly making a point to the world that there’s something you can do and you want them to know it.

People tend to forget things they saw before but don’t see again. If you think an ability of yours is being overlooked, it’s probably because people have forgotten you have that ability, and you haven’t bothered to remind them.

You can’t get the recognition you want or deserve if you’re hiding in the shadows. As far as you are comfortable with whatever you produce, show it to the world as far as possible, without shoving it in people’s faces.

If you need any motivation on the courage to be yourself as an artist, despite feeling unoriginal, I recommend my aunt’s blog post: Archie Leach Syndrome: The Courage To Be A Fraud

5 thoughts on “On “Doing You” and Showing Off”