I was planning to write this earlier, but circumstances are difficult, and I guess Ekko got to it first. But this is not a review. This is me blogging because I like blogging about cool things. Ehalakasa is a cool thing.

I like music and poetry, and Ehalakasa has that. Honestly, to this day, I wonder where I was all those years…If I had known earlier that such a strong community of people who believe in the arts existed, I think I’d have been a lot happier. Well, at least I know now. 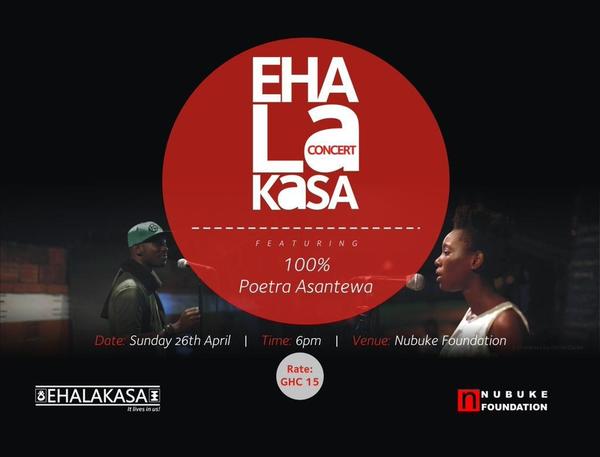 So, the first Ehalakasa concert of 2015 happened on 26th April, featuring, primarily 100% and Poetra Asantewa, who are already two of my faves. I asked 100% to marry me after the first time I heard him perform in 2014, and he didn’t mind me. He even went to get married to someone who wasn’t me, can you imagine? As for Poetra, I’ve been stalking her saa, her blog her Youtube videos, Soundcloud, whatever. I admire her for being strong and feminine and strongly feminine, and saying things that nobody else dares to. My favourite poem of hers, I think, is “Poetry ain’t sh*t”. It said a lot of things I was thinking. The whole piece resonated with me.

And so it was pretty cool when she, Dzyadzorm and Mss Ndabi invited me and two of my friends to open for their show last year, and even cooler when she and 100% contacted me to open for the Ehalakasa concert this year.

I had a lot of fun at the event, right down to the outfit. I borrowed a shirt from my friend Debbie because I’d left my own white, long-sleeved shirt at home, and I borrowed Simeon’s tie. The first thing 100% said to me when he saw me was that I looked very Janelle Monae. Now, though I am a hardcore Janelle fan, looking like her was actually not my intention. I’ve been wearing black-white-grey for over a year now. I’m a self-declared monochrome dresser, and I made the wardrobe decision before I became well-enough acquainted with Janelle to know that she only wears black, white and red. But the tie decision was just because earlier in the day, Simeon had been wearing it, with a long-sleeved white shirt, and it looked good, so I stole the tie (and the look).

The other opening acts were Crossroad Essence from California – and they were really fun to listen to…some cool, hop-hop-percussion-spoken word things. I remember the girl, Jazz’s piece about femininity, and her dressing matched her imagery, I must say. The last was Philippa Yaa de Villiers. She’s an Australian Ghanaian from South Africa, who delivered pieces that made me question my existence. I had stalked hr on Youtube three days before, and so I already knew that she was really good. She is a performer if there ever was one. Her body language is spectacular, and she knows how to get in and out of different characters. She can perform poetry like drama. I didn’t get to talk to her, because she left early for Writers PG.

Now, as for Poetra and 100% themselves, the main acts of the concert…they killed it right from the start. Chale, no exaggeration, they brought Power onto the stage. I mean, I was dead by the intro. You should have seen me jumping up and down in my seat. (Oh, leave me alone, I’m not even seventeen, la! Can’t I be immature small?) saying, “That’s so cool!”

There was a chorus chant:

Power changing people, making all of us unequal

And it was hypnotizing!

I will not lie: I thought that it was the best stagecraft I had ever witnessed. There was background music at some parts, and the timing was just on point. There was even some part where Poetra started rapping with the song “I’ve got the power!” playing in the background. But the best part was when the lights started going off, and then 100% and Poetra started doing some decrescendo/diminuendo things with their voices. And then nearly everything was dark. Get it? There was no power! (AKA Dumsor) Now you’d have almost believed that it was real dumsor…but the microphones were working perfectly! And then they were like, “Maybe if we start again, the power will come back,” and then they started the chant again, with a crescendo and the lights came back on, and I think this is where I started jumping up and down in my seat.

Now even though I was dead by the end of the intro, I thoroughly enjoyed the rest of the event.

Honestly, these people keep helping me expand the number of things I thought you could do with spoken word, never mind that I didn’t even know spoken word existed before 2013. LOL. Poetra has a beautiful singing voice, and an admirable ability to switch between singing and speaking. 100% could be a full-time rapper if he wanted. He has some audibility and eloquence that a lot of rappers don’t have, and I think I would like Ghanaian music a lot more if his kind were making it.

Oh, and I must comment on his outfit. It was 100% swag. His theme was red, and his red shirt had his name on it, which was really cool. And his pants were some awesome, baggy, African-print trousers. The outfit was topped off with a snapback. I’m teasing here but…not many people past 20 can pull off that afrocentric teenager look. Especially with a bald head. But he’s 100% swag so he can pull anything off.

9 thoughts on “Power to the People! (#Ehalakasa)”