I usually have a strategic way of switching around books on my “to read next” list. And I operate mostly on suggestions. But one day, I decided I wasn’t in the mood for any of the books on my very, very long “to read next” list. (As unlikely as this is, it does happen sometimes.) So I went hunting for a book I’d never heard of before. I knew I wanted YA, very modern, and possibly even futuristic. The real reason I was so specific with what kind of book I wanted is that I’d been reading A Storm of Swords (GRRM) for over 2 weeks and I honestly just needed a break.

Thanks to a combination of Goodreads’ algorithms and Tronomie’s judgment, I finally settled on The Selection Trilogy by Kiera Cass. And I loved every second of reading it. No lie. I do this thing where I usually don’t allow myself to read the books in a series back to back, for fear I’ll get bored of the story/the characters too quickly – but I unapologetically devoured the entire Selection trilogy at once. It is hands down my favourite YA trilogy at the moment, for various reasons. And before you ask, yes, I do like it more than the Divergent trilogy and the Hunger Games trilogy. Which is not to say that it is better than all of those other trilogies; it is just to say that I, Akotowaa, like it more. 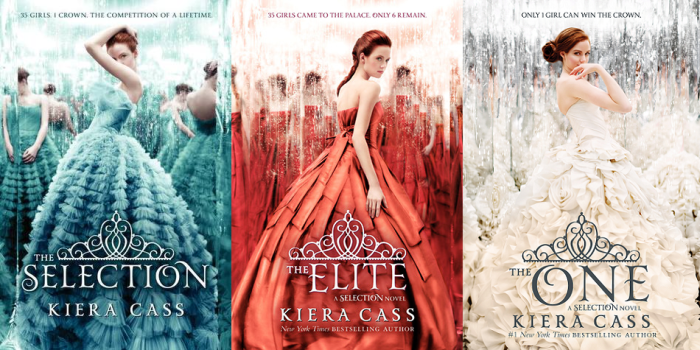 Reading this series, I actually took real notes so that later, when I wrote about it, I wouldn’t forget any of the important reasons why I liked it. And I must say it was the concepts and themes that attracted me more than anything…once you get past my superficial attraction to the idea of anything remotely Disney-like: a girl and a prince et cetera.

So here we are in Illéa, a country/kingdom/monarchy named after its supposed hero and founding father, Gregory Illéa, who repaired a broken country that was once called the United States of America, after it had dissolved itself in the brutal World War 4, and been colonized by China. There’s a brilliant metaphor that stems from here, but I’ll get to that later.

Things are very different in Illéa. Now we have monarchs in a kingdom, as opposed to Presidents in a Republic. But what really affects the society is the caste system. Just as Hunger Games had districts, Divergent had factions, the Selection has castes. They number from 1 to 8, and if you’re a 1, you’re at the top – a literal royal; and if you’re an 8, you effectively don’t exist. Fill in the gradient by wealth and status. What interested me more than the wealth/status thing about the castes was how inextricably occupation/profession was tied to the caste system.

The main character, America Singer, was a 5. The 5s were artists. And pretty low down, I must say. And you had other fixed things, like how 4s were mostly teachers, 6s were mostly labourers or servants. Hmm. This ranking gave me plenty food for thought. And it occurred to me that while we have no governmentally defined caste-by-occupation systems in the version of the real world I know, it resembles this fictional one very much. I love this thing about especially dystopian YA: it is like exaggerated reality. And another thing: it is much easier to move down in caste than the nearly impossible task of working your way up.

IS THIS HOW YOU FIND A WIFE?!

In every generation, the royal son who is to become the next king, has to find a wife. The problem? He’s lived is whole life sheltered in the palace and has had no time to date. The solution? A competition worthy of the 21st century’s E! channel. 35 girls from all the castes (except from of course 1, and I think 8, though I may be wrong about the latter), fighting to become queen, or a 1, or the prince’s wife. In truth, all of them come as a package, but the girls have different goals. Also, there’s no real scheduled elimination. If and when you’re sacked, you gotta bounce.

The entire process of choosing a wife, the next regent, the idea of one teenage man legally dating so many girls at once, is very questionable. Which is what makes it all so interesting to think about – even though the reasons for the method may be somewhat legit.

THEME OF GENDER AND BRAVADO

There is a character named Aspen. He shows up in the series as America’s boyfriend. He made me tired. He was a 6, one caste below America’s 5. And by default, he was poorer and worse off in society. And because I thought he was such a nice, sensible person before, he really made me upset when he started flipping out when America provided for him when he was lacking. Or even the idea of it. Explain it away all you want, but it really came down to one thing for me: male ego. After that, I was more or less done with Aspen, even if America/the story wasn’t. I wasn’t feeling the back and forth romance between Aspen and America at all.

This is possibly my favourite theme in fiction because I think it’s such an integral part of how and why we become who we are. Parenting is a tricky thing. Growing up is a terrifying one. Then you think about favouritism, disparities, aspiration, and most importantly, misguided parental concern.

The relationship most interesting to me here was the one between Maxon (the Prince,) and his father, the King. It was so absurd, the consistent disregard of someone who really could have so much to contribute, for the sake of his/her youth – even when this person is royal and about to be handed the reins to rule an entire kingdom. But whatever, right?

This was not a major theme at all. But I appreciate it because it was as present and as oddly placed in the books as it is in reality. In particular, there was a maid called Lucy who suffered from panic attacks, and had a backstory of trauma that triggered them.

Oh, and there is a reason Maxon reminds me of Tobias Eaton from Divergent. *winks *

This is a real thing that happens. Think Tiananmen Square. Think Biafran War. Think all of African history, pre- and even post-colonial. Think of all the things the politically altered history books don’t want you to know. Why wouldn’t Illéa (read: the United States) do it to itself? Of course – save your people from knowing the truth about the person you call a national savior.

My lexivist self likes this whole idea because of how the truth is preserved and discovered: through writing. Now that’s wassup.

AMERICA IS SO ME!

She’s a hotheaded, impulsive, very intelligent idiot, with a talent for screwing things up while aiming for a very beneficial goal. I have never seen anyone who makes such Akotowaa-worthy bad moves! Reading her was so much fun. Except the love triangle part. I have no problems telling people I love that I love them. The fact that America couldn’t do that was highly irritating.

Two major things that I liked:

I love that the main character was called America, a symbol of the past, of rebellion. But this is the metaphor concerning the history of Illéa which I said earlier in this post that I’d get to later: The Selection trilogy is lowkey about the fall and eventual rise of…America. That was a fascinating epiphany.

This series is relevant. (And also slightly sappy and frustrating at times. But it’s lit!) Read it, because I said so. =D