Solitaire is a French word. It means “lonely”/”alone”/”isolated”.

Solitaire is a computer game, designed to be played alone.

I sat in math class almost 2 years ago, and as usual, every single thing was flying over my head. I opened my notebook and saw parabolic graphs I didn’t understand. I would rather have been anywhere but that class; several times rather have been playing Solitaire on my bed. In my room. Away from people and life.

Solitaire was my escape strategy. It was the computer application I went straight to when I didn’t want to think. Thinking was too hard but Solitaire was mindless enough. The Microsoft Collection had about 6 different types of the game, making it nearly impossible for me to get bored of it. And as I sat in that IB Higher Level Math class, I definitely didn’t want to think. However, the class had an unspoken no-computers policy. So instead of Solitaire, I started to scribble words on top of my parabolic graphs.

Perhaps I should have been more concerned about how I fared in that subject, but I genuinely couldn’t bring myself to care. I had my eyes on graduation. With math in particular, I just needed to hit the pass mark and pass on to graduation. Excelling in the subject was out of the question. If I managed to just get by, that alone would be a miracle.

I zoned out completely. Writing it was a mindless endeavor, and it was nearly as much fun as playing the game itself. I had made a new game: a Solitaire word game. Ace. Two. Three. Four. The paragraphs began to form all over the page, squeezed into corners between equations. I was about halfway through by the time the class ended and hadn’t learned a thing. I forgot about my Solitaire word game.

Another math class. I opened my math notebook and saw the paragraphs of my word game. Well, if I hadn’t gotten anything from the last class, what were the chances I’d benefit from this one? I might as well continue writing. Five. Six. Seven. Eight. Nine. Ten.

At some points, I would walk to school alone. The most popular girl in my class never walked alone. She literally had the nickname of “queen”, possibly because of her influential online presence and general reputation. I wasn’t the biggest fan of her friends but their appearance of untouchable “royalty” still intimidated me. I tried to ignore them as I walked. I did not always succeed.

This was the period of my intense obsession with Janelle Monae. Nearly every time I put my earphones in, I would go straight to this one album: The Electric Lady.  For a while, my favorite song was QUEEN. I loved these lyrics:

“Even if it makes others uncomfortable, I will love who I am.”

My word-game had turned into a poem now: “Solitaire”.

In this period of the Electric Lady and Solitaire addictions, one of my roommates was an artist. The previous year, we had taken IGCSE Art together. She abandoned art for humanities in the IB Diploma Programme. I left it too, for Mathematics and Physics. In the months and year after we left Art, she would periodically ask me, “When was the last time you drew?” If my pencils were food, they’d have gone to rot from having remained untouched and stale for so long. The artist in me felt like she had died.

But I refused to let her go. As Dylan Thomas said,

“Do not go gently into that good night

Rage, rage against the dying of the light”

If the artist in me had died, she must by all means be revived: “Undeath of the Artist”.

I used to think the friends I had the first year would be my friends forever. Our bond seemed so strong and permanent. I didn’t know how ephemeral the whole thing was going to be. The close circle broke up. I wrote my pain. I vented privately. I vented publicly. In very unpoetic words and several expletives. Finally, about 2 years later, when I’d calmed down a little, something else came out, in the form of something that finally resembled poetry. I used it to let go of my harbored hurt: “Ephemeron”.

The last year of high school was the one where my classmates wanted to make memories. Selfies and group pictures were taken nearly constantly. I felt disconnected. It was a struggle between wanting to fit into a community and knowing that this community was not meant for me to fit into anyway. There were many pictures. For the most part, I wasn’t in the pictures: “IWITP“.

Outside of the math classroom was the balcony. The classroom was on the second floor. I stood there and looked down at the mostly-empty car park. A classmate of mine was standing next to me. “If I jumped from here, do you think I’d die?” I asked.

“Yes,” he responded. And maybe he told me something along the lines of “don’t do it”; but by that time I wasn’t listening anymore. God, I had questions. God, I needed answers.

Dear God, I began to write, as I sat in a teacher’s office perhaps a few minutes later. I did not want to be in school. I did not feel like doing life. What did all of this mean? What did God want from me?

With a backlog of homework, a bucketload of tears and a series of abysmal scores on tests, I found myself in the wardrobe room of my dorm some time later. It was small and cramped, and there were no chairs. My heart was extra-heavy and I plopped down on the floor. There was no one to talk to. No one but God. There, on the floor, at my lowest, I continued my letter to Him: “Dear God”.

I walked into the dining hall, went in line for my food and sat down at an empty table to eat. As I observed the woefully microcosmic world around me, I wondered when I’d become so comfortable with this phenomenon of eating alone. I watched others freshly out of the food line looking nervously around the hall for familiar faces that would welcome them to the hopefully empty seats at their tables. I genuinely wondered how come they weren’t as comfortable as I was with eating alone. Did they not see the liberation in it? What was all this anxiety about being seen as solitary in room full of people? Maybe the experiences that had forced me to be an hardened outsider had simply led me, after all these years, to become an expert in keeping myself company: “To Be.”

Every time I performed Solitaire, at least one person would ask me one of two questions:

The answer to the first question was: it’s easy. It follows a sequence, and it has moments of rhyme. If you know what a pack of cards looks like, Solitaire’s lyrics are easily crammed.

The answer to the second question was always: nowhere. (Until now.)

I present to you my spoken word project, Solitaire, on 19th December 2016. 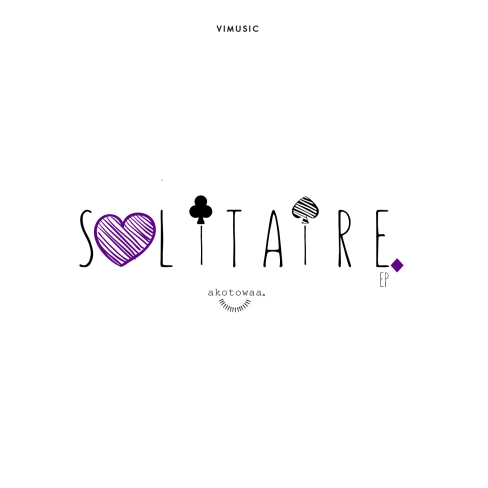 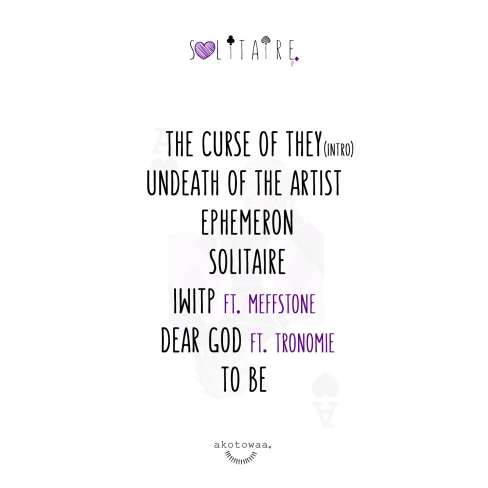 18 thoughts on “Where did Solitaire even come from?”