Hello, and welcome to the third installment of my On the Ceiling series!

(Update: individual OTC stories are no longer available, but you can download them all in a single PDF collection on my OTC site.)

[Slightly related: two rather old blog posts that have a similar theme to this fictional tale: Why Some Ghanaian Kids Don’t Speak And Don’t Want To Learn How To Speak A Ghanaian Language and Another Language Rant (Which I Should Have Released in September 2015.)] 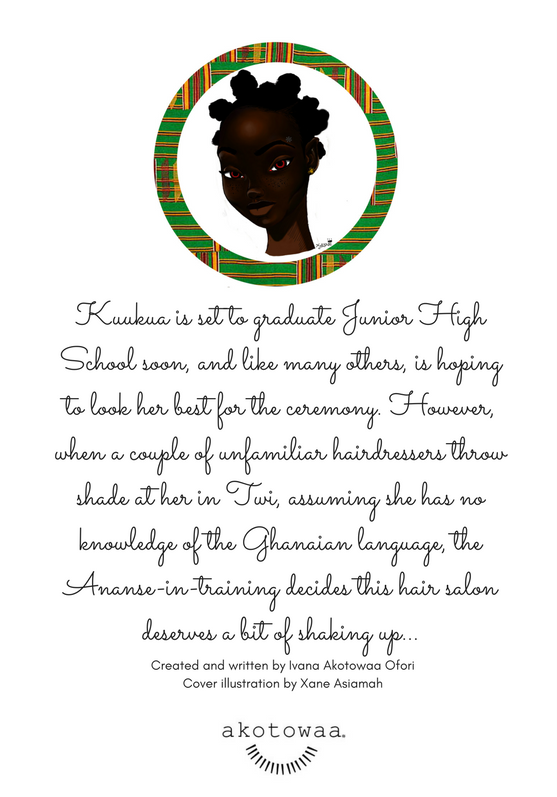 “You have a pet spider, and it lives on the ceiling,” Yaw wanted to confirm. And, as insane as he sounded, he was perfectly right.

“And her name is Charlotte.”

He was merely repeating the facts I’d just told him back to me. Apparently, this is a thing people do when they’re struggling to grasp something: repeating things that are somewhat impossible to believe the first time you hear them. Maybe saying them out loud, from your own lips, makes them more mentally digestible. The conversation was going very slowly thanks to this, but I decided to be patient with Yaw because honestly, I’d done this too, a few months ago, to my father, when I’d found out the thing I was now preparing to tell Yaw.

Truth be told, I didn’t know how to handle the situation, or how to explain, or where to begin. So, instead, I started rambling: “Charlotte is a golden silk orb weaver. It’s one of the most common kinds of spiders, really, and the reason it’s called that is because of the circular shape of the finished web – you know, like an orb. And golden because the webs glint golden in the sunlight. Of course, you can’t see it glittering right now, because we’re inside, but if we weren’t…”

“How and why the hell do you have a pet spider? I’m very sure you hate spiders.”

That was kind of true. Spiders had always made me uncomfortable, and I preferred to stay away from them. When I’d woken up one day, a couple of weeks ago, to find this huge orb on one corner of my bedroom ceiling, I’d been alarmed. I’d gone right downstairs to get a cobweb brush to scoop the web up. In the middle of this cleaning process, its builder had appeared, and upon seeing her (I didn’t know how I knew it was a her, but I did), my heart rate accelerated. She wasn’t Aragog kind of huge, but she was way larger than any common spider I’d ever seen. All six of her red eyes seemed to be staring right at me, her black-and-yellow legs suspiciously still. Taking a deep breath, I’d gently swiped her too onto the ceiling brush, taken her outside, and let her go off into some garden. By evening, I had a new, huge orb web in my room in the exact same place, and its maker sat quietly at one of its edges; I was sure it was the same spider. She would not be uprooted.

It had taken me ages to get used to the fact that there was a spider living in my room and that there was no way to get rid of it. I’d called my father into the matter, and he was the one who’d told me of its species, characteristics and so on. He hadn’t been surprised in the least. The spider, he said, was mine, that all the Ananses usually had one or more of their own “personal spiders” which turned out to be very resourceful. “You think we own so much spider-silk thread in our family because we buy it?” Daddy had asked. “No. We extract it, from our very own spiders’ spinnerets. I’ll be teaching you how to do that soon, now that your own spider has appeared.”

I had thought, when I’d been told about this whole Ananse business, that there was nothing really supernatural about us; we were all just regular humans with above-average gifts. But the part about being so specially connected to arachnids? That sounded a lot like a superpower to me, and less explainable as “coincidence” than even the trend of born-on-Wednesday Annans.

To help myself get used to it, I’d decided to name “my” spider, and, awful as it was, the first name that had come to mind was Charlotte.

“You know none of this is making sense, right?”

I sighed. I should just tell him now, I thought. Once and for all.

“Yaw, there’s something I need to tell you. Like, a lot of things.”

“Damn right. It looks like there’s been a lot of stuff happening with you lately. Nowadays, you’ve just become more…unavailable. I’ve been feeling like something is going on, and that if it is, you really shouldn’t be afraid to tell me, because you can tell me anything. You know that, right?”

“I mean it, oo. Like, anything. You don’t have to keep avoiding me.”

“That’s the vibe I’ve been getting. And if there’s anything I’ve been doing that’s making you feel uncomfortable, you seriously should just let me know.”

“Really?” His facial muscles looked like they couldn’t decide whether they wanted to break into a smile or scrunch up in anxiety.

“Erm. Well…” And then, strangely enough, he suddenly became unable to properly meet my gaze. His eyes began roaming all over the place, and in a few seconds, they landed once more on the spider web.

“Aha, the spider!” he exclaimed, like he’d only, right that second, remembered it. Is that not what we’d been talking about this whole time? “Why do you have a pet spider? I still don’t have an explanation.”

“Are you sure you don’t want to talk about what’s on your mind?”

“What’s on my mind right now is the spider. I need explanations.”

Read the rest by downloading the mobile-friendly PDF linked at the beginning of the post. 🙂

2 thoughts on “Kuukua and the Haunted Hair”