I can describe this book in one word: legendary.

This is probably just my youth and lack of exposure talking, but I can hardly believe this book was published in the 1980s. It feels way ahead of its time – not in the subject matter itself, because feminism in general is probably as old as the first woman on the planet – but because of how explicitly issues are tackled. I’m talking about the language, the writing, the thoughts and speeches of the characters. This feels like a book that would put its author in serious trouble with her society. And I’m so glad it exists, and very much in awe of Tsitsi Dangarembga, legend herself.

It’s 2017 and I’m now reading Nervous Conditions. It’s even embarrassing. But small by small, I’m coming out from under my metaphorical rocks and trying to keep up with the present at the same time.

Because of the book’s title, Nervous Conditions, I had thought this book was going to be about mental illness. At the end of the day, it turns out it was, but not exactly the way I expected. I’d say the major theme was actually patriarchy. (Is it inappropriate to joke about patriarchy itself being an illness? Yes? Okay, sorry.) 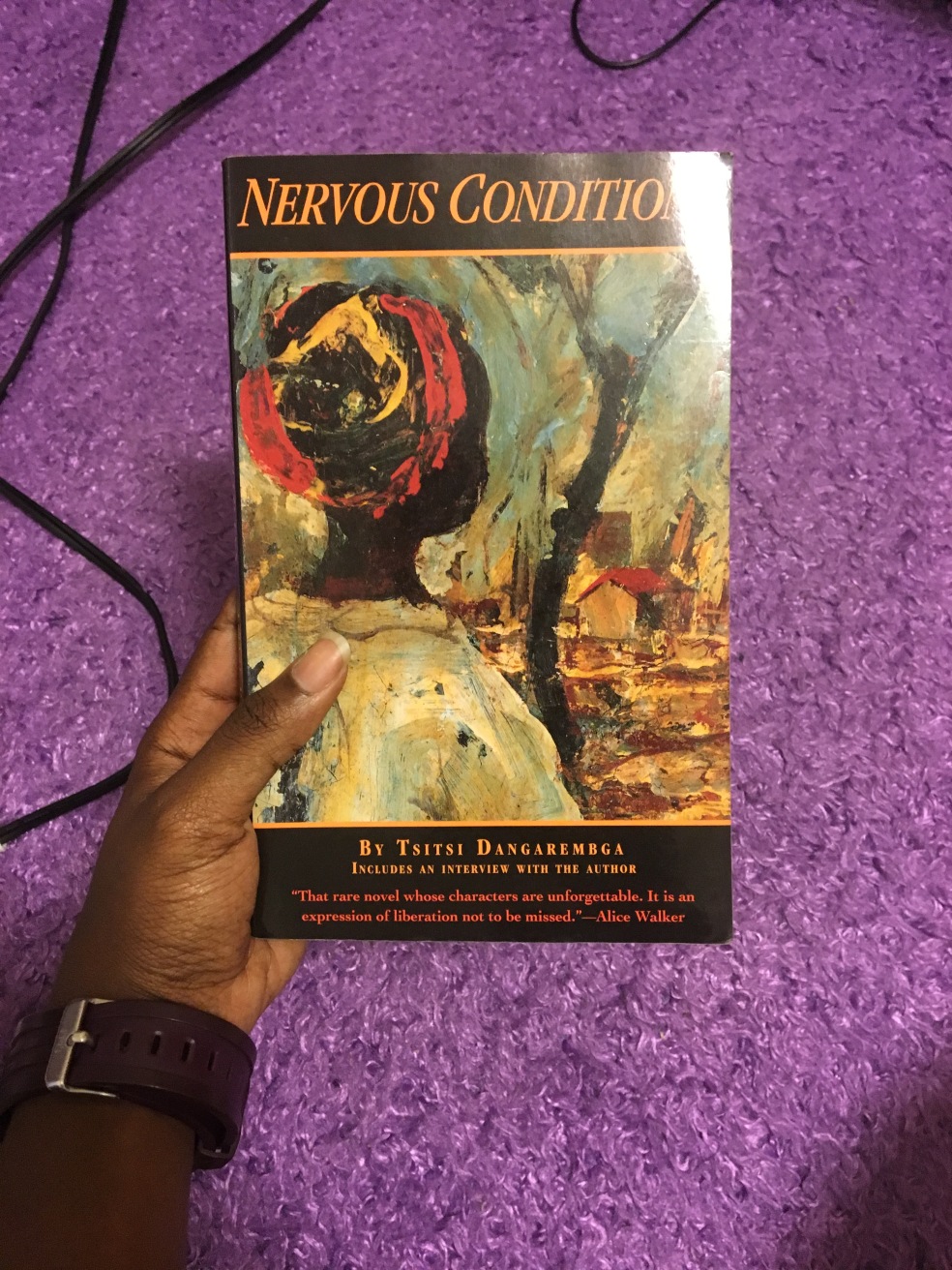 The point of that feat, whether it was intentional or not, I believe, is best summarized in this quote from the narration of the main character, Tambu:

“The victimization, I saw, was universal. It didn’t depend on poverty, on lack of education or on tradition. It didn’t depend on any of the things I had thought it depended on. Men took it everywhere with them. […] But what I didn’t like was the way all conflicts came back to this question of femaleness. Femaleness as opposed and inferior to maleness.”

The characters were so subtly yet impressively complex. As for Jeremiah, the main character Tambu’s father, he just seemed like a spineless money-chaser, albeit with admirable skill for getting whatever he wanted most times. He never seemed bothered by any kind of guilt or cognitive dissonance, which was scary to me because how do you deal with a human being that appears incorrigibly comfortable with being wrong and never feeling wrong?

More interesting to me, however, was Mainini, mother of Tambu and wife of Jeremiah. At surface level, she seemed ordinary, traditional, unquestioningly submissive to her husband. But she had a spine, and that spine showed up frequently whenever it was time to support Tambu. She didn’t use her spine “disrespectfully,” though; she used it with what seemed like experienced tact, getting her daughter what she’d always wanted through the psychological manipulation of her husband, through words, to make him think it was his idea all along, or making him believe that his ego would reap some benefit from whatever she was making him agree to. It was truly phenomenal.

My favorite character was Lucia, Mainini’s sister and Tambu’s aunt. She was that older, yet still single, sexually liberated badass who knew how to persevere until she got what she came for. With respect to her radicalness, I think it was as extreme as it could have gotten, given the traditional context she grew up in. She’d been through a lot of nonsense from society, from being old, husbandless and childless. She’s been called both a witch, suspected of cursing her own sister, and a “loose” woman because TBH, she got the sex she wanted when she wanted it. And while I admired this about her, I felt sorry for her at the same time – because she had nobody sensible to have sex with, since, in my humble opinion, all the male characters were idiots. (Except, perhaps, Chido, but I didn’t see too much of him.) Sadting. =(

The main character, Tambu, terrified me with her inconsistency. There was something very alarming about her hatred for her brother, Nhamo – or maybe not hatred, but icy distaste, or disregard, or indifference, or something of the sort. I mean, the book literally begins with how she didn’t particularly feel any negative emotions when her brother died. I was just like, “Whoa, okay sis, is everything okay with you though?” (Apparently, it wasn’t. I found out, from an interview of Dangarembga at the back of the book that Tambu was mentally unstable as she was narrating, and that made a lot of things make a lot of sense.) Tambu was so confusing (but realistically so, because humans are truly complex, often contradictory creatures) from her emotions and actions. When she lived in her home village with her nuclear family, she seemed so acutely aware of all the ways the world around her was using her femaleness against her. Then, when she moved to the mission for her foreign education, she seemed so eager and comfortable to bend to societally acceptable roles for womanhood. She seemed to “get” so many things about life and society, and then the rest was rather lost on her.

The foil that allowed me as a reader to see all the things that were lost on Tambu was her cousin, Nyasha, whom I would also describe as a main character, even though she was not a narrator. Nyasha was the most afflicted by “nervous conditions” out of all the characters in the book. It was very subtly depicted in the beginning, a mere confusion about gender roles thanks to culture shock: Though Nyasha too had been born in Rhodesia, unquestionably being raised as a traditional Shona, her parents got the chance to move to England for several years with her and her brother, Chido. They returned when Nyasha was about preteen and there were things Nyasha just couldn’t let go of. After all her exposure to “progressive” thought, all her reading, education and whatnot, her problem became that she was unable now to assimilate into her expected roles back in Rhodesia. She wasn’t stubborn without reason, wasn’t a rebel without a cause; she was simply very matter-of-fact, yet seemed to want to believe the best of everyone, even her father, one of the most egoistic, patriarchal characters I’ve ever read in my life – and for that reason, uncomfortably and unfortunately too familiar in reality.

Particularly the relationship between Nyasha and her father, known respectfully as Babamukuru, was what strained Nyasha mentally, causing so much dissonance that she just about inevitably lost it. This quote from her really struck me:

“I guess he’s right, right to dislike me. It’s not his fault, it’s me. But I can’t help it. Really, I can’t. He makes me so angry. I can’t just shut up when he puts on his God act. I’m just not made that way. Why not? Why can’t I just take it like everybody else does? I ought to take it, but really, I can’t.” -Nyasha

What a burden it must be, to have no one else around you thinking the way you do. It makes so much sense that one would start to wonder if she herself is in the wrong. If everyone around you is mad and you’re the only one who seems to recognize their madness, it’s like you’re the mad one.

A character who was unexpectedly interesting: Maiguru, Nyasha’s mother and Tambu’s aunt. On the surface, she seemed hardly different from Tambu’s mother: submissive and skilled in the art of male manipulation. But this woman lowkey got levels, bro. By far the most educated woman in the novel, Maiguru too had been exposed to whatever culture it was in England that got Nyasha as feminist as she was. The difference, I think, was that Maiguru’s age and upbringing had made it far easier to assimilate back into quietness and what was generally acceptable of a Rhodesian wife, upon her return. Only occasionally did the usually suppressed part of her come to light, through a few unexpected rants to Tambu, and a shockingly independent action she took with regards to her family – if only temporarily. It was the temporariness of it all that was problematic for me, and I did not blame Maiguru for it, but blamed her society.

This is what made me realize that it will never be enough for only individuals to develop sense, awareness and independence of the values and rights of women (or really, any social issue) when the stagnant states of their societies simply won’t allow them to do jack with it. In such societies, women are likely to either end up like Maiguru – takes a few independent actions, recognizes their futility, then melts harmlessly back into the patriarchal mould, or like Nyasha (or even Tambu) – straight-up deranged.

Maiguru said something I liked at some point, so I wrote it down:

LOL, true. The world will call any woman whatever it wants to call her without legitimate reason. Whatever meanings these words have had have expanded so much that it seems they no longer mean anything in particular.

Also from the interview at the back of my copy, which I think is a very legitimate reason why racism wasn’t a major theme in Nervous Conditions, why it is such a tricky theme to tackle when writing anything at all, was this quote:

“I think this is the catch with racism – looked at objectively, it sounds too absurd to be true.” – Tsitsi Dangarembga

And, unfitting anywhere else in this post, a quote by Tambu that I just like because of personal relatability:

“Exclusion held dreadful horrors for me at that time because it suggested superfluity. Exclusion whispered that existence was not necessary, making me no more than an unfortunate by-product of some inexorable natural process.”

I feel like this book is one that should have been able to set societies on fire. I’m a bit disappointed that it doesn’t seem like any fires broke out, though. But this may just be my lack of knowledge of the contexts and history of this book’s reception. Either way, I still think Nervous Conditions is legendary. I liked it a lot.

4 thoughts on “My Thoughts: Nervous Conditions”