Warning: This essay includes highly problematic and partially-irrational thinking. The author is aware of this. It is, in fact, the point of this essay having been written. As such, there is no need to point it out to her.

I am still a dependent. There are many things my family cannot afford, but there are also many things it can. I am usually on enough financial aid to not be anxious about how my school fees get paid. I have never had nothing to eat as a result of anything other than my own laziness. My classically chaotic transition into adulthood, featuring my financially illiterate and irresponsible self, has been peppered with incidents involving too much wasted money and too much food gone bad. When I’m broke, I know it’s probably because I bought too many books that month. Materially, I am not suffering.

I am mildly inconvenienced in several ways, especially regarding my technological devices, their limitations, planned obsolescence, and simultaneous, relentless malfunctions. I don’t have the resources to replace them. Still, I manage to get a lot of things done, and many people get by on even more dramatically dysfunctional machines. While my material situation can be highly irritating, there is no real suffering involved.

There are ways I do suffer. The affairs of my physical body are responsible for some of them. It’s difficult to explain to satisfaction, but my body seems to be constantly trying to kill me. As far as my knowledge goes, I do not have a terminal or auto-immune disease. But my body is very weak, and it always seems to be malfunctioning in some random or dramatic way. Sometimes, the slightest intensity in my daily activities has it crashing for days. I don’t have to do much before my body starts feeling like my limbs are made of lead and turns me into a bed potato. My photosensitivity is a disability—I’m no longer shying away from calling it one, because it’s incredibly intense—which ensures that I cannot partake in many common 21st-century activities at regular levels, lengths or quantities without temporarily rendering myself an invalid. This affects my productivity and stability. It is inconvenient and a mostly-legitimate form of suffering to me. I don’t understand why I am designed like this. I often ask God, because I can’t see the logic in intentionally creating a human being whose body only functions at 20% of the capacity of the average human being, but He hasn’t given me an answer. Because I don’t have an answer, my physical suffering tends to feel baseless, purposeless and stupid for merely existing.

I suffer psychologically, and this is where my suffering is most intense. If my body seems to be trying passively to kill me all the time, my mind is trying at least four times as hard, and very, very actively. There are hardly three days in a fortnight when I don’t think of killing myself at least once in each 24-hour cycle, when I don’t beat myself up about the things I have (not) achieved or the state of my relationships and friendships (when they exist at all); when I don’t think about all the ways I am so far from normal and how that will surely be the death of me in some way; hardly a day when I am—if not happy—at least content. 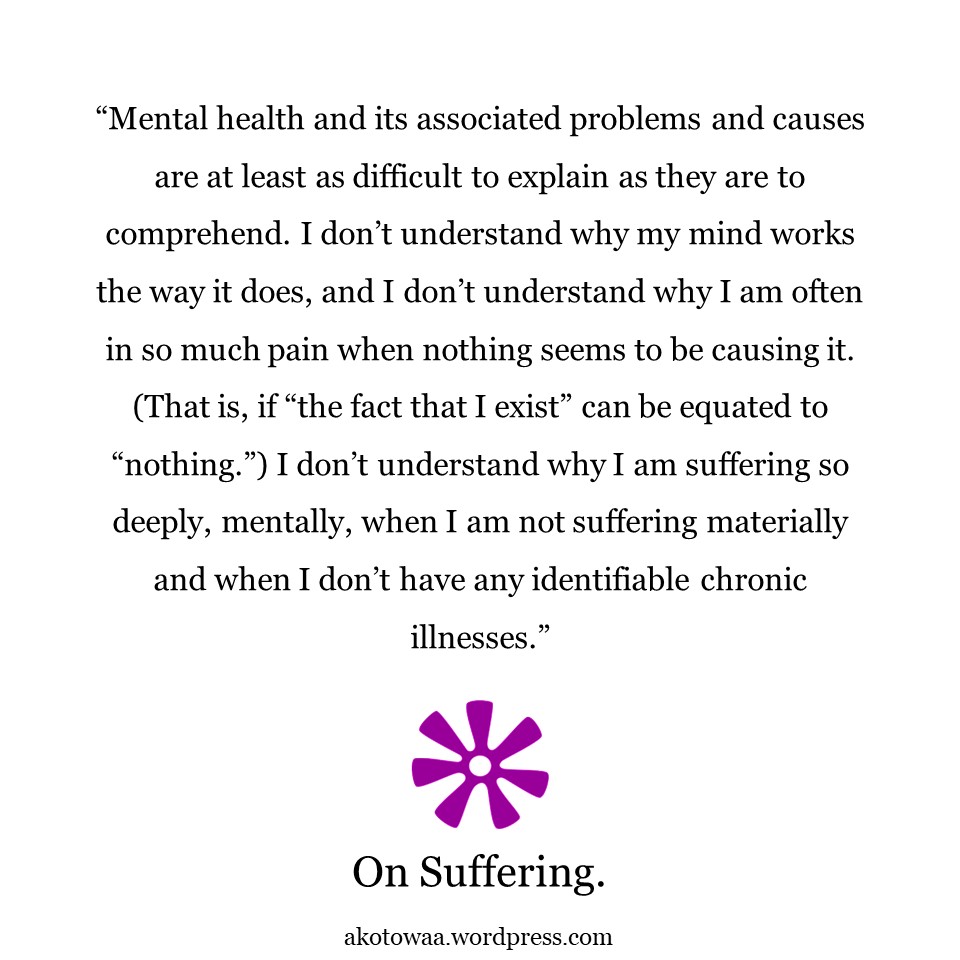 When I bring my blades to my skin and try as much as I can at any given time to tear it open, it is always in the moments I feel like an irrational, crazy person, beyond the influence of reason, happiness, God or persuasion. I need to tear myself open, I need to see myself bleed. But the urges are not entirely irrational. I feel so much pain that doesn’t make sense because nothing identifiable is hurting me, and I want it to make sense, and it feels like the only way to make it make sense is to have something actually hurt me, which is why I decide to hurt myself. Cutting myself is a deliberate attempt to make myself suffer.

In one of my recent spoken word poems (unrecorded, so don’t try looking for it), I have a line about how I deliberately stay away from food even when it’s mere feet away. There have been instances when I have completely refused to eat and have had to be nearly force-fed by my best friend. It doesn’t happen because I am unable to eat. It happens because I am, in the moment, unable to accept that I have the privilege of access to food when so many others don’t—and that these “others” excel in many ways that I can’t because my brain and body won’t allow me to function like a normal human being. But since my malfunctioning brain and body don’t seem to me like legitimate excuses to be exempt from material suffering, I attempt to induce it.

That’s one reason. The other is that, since my mental and physical suffering don’t make sense to me, I try to make myself experience a kind of suffering that I think does make sense. Hunger is real. Hunger makes sense because it is a result of lack of food. Every normal human being who lacks food gets hungry. If I suffer from hunger, my suffering will be “normal” and maybe going through that can teach my “abnormal” suffering a thing or two.

Rationally, I know that forcing myself to suffer won’t suddenly “cure” my mental health problems, but in those moments, I am as toxic as anyone who thinks that telling someone with anxiety to “just not worry so much” or someone with depression to “just be happy” is helpful. I am essentially saying to myself, “You’re here with your false suffering while others are really going through things—aren’t you ashamed? Let me show you real suffering so you can stop fooling over there.”

I often think of suffering in the context of entertainment industries—specifically, “hustle” culture. I remember, some time in 2017, getting upset at how glamorized “hustling” seemed to be. Not only did I perceive it as being treated as the only way to rise legitimately within the industries, but I also felt it had gotten to a point where people were looking for disadvantages to experience so they too could partake in the glamor of the “hustle.”

Originally, I was opposed to the glorification of hustling because I feared it would lead to the acceptability and consequent embrace of the dysfunctional systems that made (and make) the hustle necessary for some people. Like, my dear, it’s nice and all that you “made it” in spite of a system that doesn’t work… but I hope that in future, the system that should have helped you works well enough to help someone else, the way it’s meant to. The way suffering is talked about regarding its role in the journey to “success” makes it become part of the aspiration sometimes, whether consciously or unconsciously. When people see their role model artists, they want to be like them—not just get to where their role models are, but to get there in the ways their role models did, suffering inclusive. I guess it can be “inspiring” when you already are from a similar background as your role model, but how complex is it when you aren’t?

I’ve read varying stories/rumors about American rappers who either lied about their childhood wealth (in order to seem like they came from destitute backgrounds) or intentionally got themselves convicted so they too could say they had experienced life behind bars or something equally ridiculous to me. And that’s how I knew, even if subconsciously, that what I have been doing to myself is at least as silly.

I often feel like my life and path are illegitimate because I haven’t suffered enough. Ask me to define “enough” and I don’t know that I’d tell you. Besides, I don’t think I’ve gotten anywhere substantial in my career yet, so that’s another layer of irony… and frustration. Because if I’ve suffered so little, why have I still achieved so little? If I’ve suffered so little, what’s my excuse? My physical and psychological suffering don’t count as excuses to me, regardless of the fact that I’m consciously suicidal on a near-daily basis.

I don’t know what to do with the (comparative) absence of (material) suffering. I don’t know what to do with the (superlative) abundance of (psychological) suffering. I don’t know what to do with the feeling that I need to make myself suffer, or the impulse to make myself suffer, especially in the moments when such impulses seem too strong to resist. I’m not sure why I’m so attached to the idea of suffering and filled with so much guilt by the idea of not suffering—especially since I do believe that not suffering is the point of our strife. Why do our predecessors—biological, professional and otherwise—struggle, then, if not to make sure their successors don’t have to struggle as much as they did? (I am aware that this is wishful, idealistic thinking and that in real life, there are far too many people who love to think, “I went through all this shit, so you ought to as well.”)

It’s okay to acknowledge my comfort and the ways I do not suffer. Not to do that would be wrong and hypocritical, whereas I believe doing so adequately acknowledges the success of my predecessors in providing for me before and during my lifetime; my elders and ancestors, every African woman who has ever written and published, etc. Learning how to acknowledge the ways I do suffer sounds like a healthy thing I should be practicing actively. The sense of deserving to suffer is probably something I should get rid of, but I’ve often had no idea where to start. I believe that writing this is, in fact, a pretty good starting point.

7 thoughts on “On Suffering.”