[Hi – please, if you haven’t listened to Solitaire, my debut spoken word project, please go and do that and come back. Thanks.] 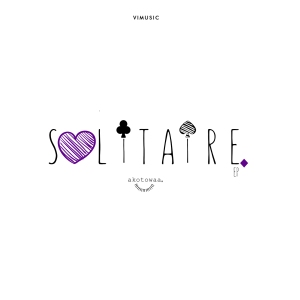 I was madly nervous during the listening session. This was 2 weeks before Solitaire was due to drop. I had invited some of the coolest people in Accra that I knew and trusted to come witness and give me feedback for the biggest and riskiest thing I have ever done in my life to this point. Because they were my favorite people, I wanted to know how they’d respond as I believed it would give me an idea of how people as cool as them (AKA my target audience) would respond.

Surprisingly enough, the thing I was most concerned about was people hearing my words and realizing how wack and corny my lyrics were and finally see what a fraud of a writer I was. LOL. Imagine – my writing was just about the one thing nobody complained about. So what’s wrong with me? (BTW, all Solitaire lyrics are available on Genius.com.)

Solitaire is a huge experiment. And it wasn’t intended to be, as unbelievable as that may sound. I have never heard a project that sounds like Solitaire before, true, but I realized that after it was completed. I didn’t start out from the beginning thinking, “Okay, for this project, I’m going to try my best to go all out in breaking all the rules.” It seems befitting to my personality to have done something like that, but that isn’t what happened. Solitaire came to life mostly organically. I described the circumstances around its lyrical composition over-dramatically in the blog post “Where did Solitaire even come from?”

Solitaire (the poem itself) was written while I was blanked out in math class. Ephemeron was written in my room in boarding school during very hormonal moments. It was cathartic, though. Imagine harboring hurt for 2+ years from people whom you are forced to see nearly every day anyway. Dear God was written under high duress (that is, Part 1). I don’t know why it ended up following a regular beat. These things just happen to me. I think Dear God was one of those casual voice notes I sent my manager like, “Look, Ekko, I wrote something.” It wasn’t even originally part of the tracklist. We decided to replace one of the originally intended tracks with Dear God very late in Solitaire’s compilation stage. I wrote Part 2 when Ekko and I decided that Tronomie should sing more than just background vocals. I’m glad he did. It gave the poem a sense of further completeness. And his voice is amazing. Love you, Solitaire God! ❤

To Be has an interesting backstory. It was not originally a poem. I had written a blog post called Comfort as Yourself, and during Ekko’s daily rounds of Akotz Stalking Sessions (back when he actually had time to recreationally care about my life), he found the blog post and sent me a Facebook message immediately, telling me to turn it into a poem. That’s why, to some extent, I feel like he wrote it rather than me – even though he never touched my pen or my words. Maybe we both wrote it in a way.

During the listening session, someone asked me if I had tried saying Undeath of the Artist, as more like a poem and less like a rap. I had forgotten about it then, but in fact, I had tried. In February, I took a break off from school to record demos of every intended Solitaire poem in the studio with Tronomie. He pressed record and stopped halfway through, like “No. This needs a beat.” Um…well, I knew that. A few months later, I met EDWVN for the first time in person. I had been following him for a while on Twitter and had finally mustered up the courage to enter his DMs and ask whether we could be friends. The first day we met, he played a bunch of stuff he’d produced for me (the only productions of his I’d ever heard before were from Sutra’s mixtape, The Art of Being. I’d been stalking Sutra for a while then too.) I hadn’t even paying attention to his music; I’d just thought he was a cool person from his tweets. But then when it finally came to time to start thinking about production, well, I thought, if EDWVN didn’t produce it, anka who would produce it? And as you can see, the production is cooler than the poem itself. So maybe I made a wrong move. LOL

Solitaire is a freaking hybrid.

The whole project ended up being strange, even to me. But maybe that’s just the only way it would make sense because I’m strange. I don’t fully understand myself, much less am I able to understand or predict the nature of the art that comes out of me. Solitaire was a huge experiment…but apparently, it worked.