Yesterday, 2nd April 2016, was so magnificently eventful. Nothing this blog-worthy has happened to me in a while. Among many other things, it wa

s the day of the much anticipated Afraba Concert (which you should know from all my social media) by Adomaa.

I had a sore throat. I’d had one from two days before. Honestly, when I’d written my piece for the Afraba intro, I recorded a voice note and sent it to the VI team, and Adomaa asked “Why has she swallowed a frog?” Isn’t that great? Haha! I went for rehearsal and my voice was just broken. If anything, it was worse than it had been the day before. So when I left rehearsal the day before the concert, the intention was to try all sorts of remedies to try to fix my voice before I had to perform the next day.

I had lozenges. Mehn, I tried gargling warm salt-water – and nearly freaking threw up. I hate gargling. I can’t do it. Never again. If I’d been able to manage it without bringing up bile, it might have been the fastest remedy. In the end, I had cups (plural) of hot tea with loads of honey in it at different points in the day. 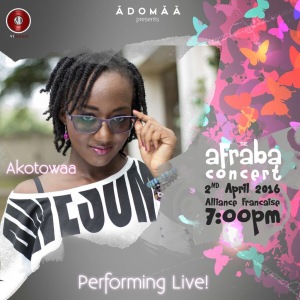 Note that in the midst of all the preparation for Afraba Concert, I was also running around town trying to get stuff for school. I’ve spent way too much money this week, I tell you.

So anyway that was me, with the voice that sounded like a dying cockroach (you know, if dying cockroaches could scream), and I was at rehearsal the day of the concert, hours before showtime.

Now, when I was leaving home, I was a bit short of credit, but then I remembered that my dad had bought me a 20 cedi one a week before and it remained in my bag unscratched. Gleeful, I took it out, and tried to scratch the thing. Unfortunately I don’t know if the thing melted onto the card or what, but it didn’t want to completely come off the numbers. So, struggling to read, I tried to enter the code I thought I was seeing on the paper. Three or more times, I entered it wrongly. Then I got barred from the Airtel service. Ugh.

Kobby Graham, who had popped in way early, said hi to me, and after effective blasting-discussion about his lowkey wedding, he advised me to immediately call Airtel. So I tried to. I don’t know whether everyone working in Airtel had gone on break, oo, but there was no answer. I was standing there with the phone on my ear, listening to dialtones and suddenly WHAM! Something slammed onto my lip. And it was huge.

At first I thought it was a fly, so I tried to brush it off. It wasn’t a fly and it wasn’t brushing off. That’s when I started screaming. I fell to the ground and removed the evil beast from my lip, minus its stinger, which was stuck on my mouth (LOL this is a horror story isn’t it?) after which it promptly lodged itself in the midst of my locs. It was so alarming and it was like everything was happening at once. My eyes were closed, I was crouched on the floor, one hand still clutching my phone, my glasses elsewhere on the floor, there was a buzzing creature moving in places around my right ear, someone had come towards me, told me to stop moving, stop screaming, they’d remove the bee from my hair. I guess at that point everyone was safe because the stinger was inactive. Used goods. Stuck on my upper lip. Uuuugggghhhh.

So there was this wonderfully helpful person called Elsie who’d been stung before, managed to squeeze the stinger out, and give me first aid by applying ice in her water bottle to my lip and then using makeshift-Robb, my lip balm, on my lips. Eventually I went to the pharmacy to get antihistamines and sting pain-relief but I was so annoyed.

I couldn’t crack a smile. Which was alright because it hurt to smile anyway.

At the beginning of the show, I got to premiere my first ever poetry video, Anti-Indoctrination! It’s not out on the internet yet but obviously you’ll hear about it when it is. And theeeen, I gave an introduction to Adomaa’s first song from the Afraba EP, “Afraba.” So that was lit too.

By the way, the throat/voice therapy worked. Until right after my performance, when my voice suddenly and swiftly abandoned me thoroughly, as if I was The Little Mermaid and Ursula the sea-witch had suddenly decided that it was time. As I write this, I still cannot speak. And my lips are still three times their original size, LOL. I’m prematurely tired of all the explaining I’ll have to do – with no voice!! – and if I’ve ever had insecurities about my appearance, I have to get over them fast. NOW.

Also, if you don’t follow me on Twitter yet, do: @_Akotowaa. That’s where I talk the most. And I RT’d a lot of #AfrabaConcert stuff. If you want to see how things went, search that hashtag on Twitter.

Anyway, makeup by Afriyie managed to make me look somewhere close to acceptable that night before the show. And to be very honest it was a madly LIT show. THE LITTEST CONCERT I HAVE EVER BEEN TO! I would have liked to blog about it, but I didn’t take enough notes so I can’t even remember what song everybody sang (there were a lot of performers) and in any case, I feel the whole thing would be/have been much better experienced than read about. I got to watch most of it because I wasn’t doing too much in terms of participation. So I ran away from backstage. 🙂 🙂

Here are some swollen-lip selfies that show how good the makeup concealing actually was (no, I won’t show you the gruesome non-makeup-version, for it to be on this blog and available on Google Images forever LMAO no):

Here are some pictures by Kwadwo Birikorang Adjei on Facebook.

This is the one he took of me:

5 thoughts on “When You Have To Perform With Bofrot”